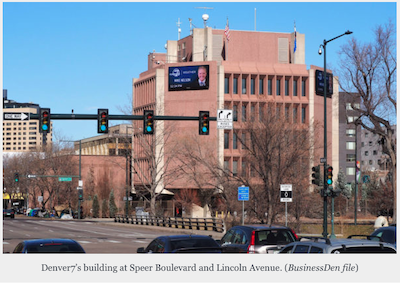 A few months ago, there was a story about Channel7’s owner wanting to sell the buildings on the land to a developer (surprise!) to build an apartment building. Scripps Media is the applicant, but apparently is not interested about anything except demolition. (E. W. Scripps Co. is Denver7’s parent company.)

Since there is a lot of land at that angular intersection at Lincoln and Speer, there could be room for an apartment building while saving the major draw: a five-story tower that is imposing, beautiful, and a part of Denver’s history.

Denver’s history has been sliding away bit by bit, as many of us know. But this tower is categorized in the Brutalist style, and Denver doesn’t have many examples of that type of architecture. When you see a tower that sets the layer of crushed red rocks against a gray concrete frame, with fine recessed windows, there should be some way to save the tower for another purpose. Apparently, the land is already zoned for 12 stories (another surprise!).

Three people in Denver – two attorneys and an architect – agree about the importance of this complex, which was finished in 1969. They filed a Notice of Intent last Friday, before the cut-off yesterday to grant the owner to receive a Demolition & Certificates of Demolition Eligibility. That certificate would last for five years. With this Notice of Intent, to be followed by an application for designation, the three supporters have until February 19, 2021. A mediator will work with both the owner (and a developer) and the applicants.

This morning, BusinessDen reporter Thomas Gounley wrote about this, with quotes from both Michael Henry and Bradley Cameron. Both are attorneys; Henry recently retired as the executive director of Denver’s Board of Ethics, while Cameron also retired, and had worked in the Colorado attorney general’s office. The third person who signed the Notice of Intent is David Lynn Wise.

Henry was quoted in today’s story: “We tried to persuade them all that there’s so much vacant land on that block that they could find a way to adaptively reuse that building,” Henry said. “And of course, they said, no, no, no.”

One quote from the story: “When it was constructed, Channel 7 clearly wanted to make a building that would be prominent and highlight the TV station,” Cameron said. “I would argue they succeeded.”

And another quote: “It’s a very key intersection in the city,” Henry said. “So many people pass by it every day. It really is a beautiful building.”

So true, but to learn other things about the complex, along with others concerned about this, someone I know is worried that many of Denver’s buildings (including homes) are sliding away. She is Bree Coco Davies, who I met years ago when she interviewed me about the second Guide to Denver Architecture. She had written columns about the changes in Denver for Westword. Then a few years later, I ran into her at a mayoral forum in 2019, and Davies was the campaign manager for Kalyn Rose Heffernan, who had really good ideas. And, then, now, a friend noted that Davies was writing a blog called Tiny Letter.  I am not surprised: She has always been busy in so many different worlds to make things better.

She has traced the ups and (often) downs about the city’s love/hate situation when buildings and stores are suddenly gone, whether we want that or not. But, then, there is the Channel7 building with a tug of war between an owner and the community. And, for me, when buildings evaporate, so does the history. Not all buildings can be saved, but at some point Denver’s history will just be completely vapid.

Davies had this to say, in this new Letter:

“Though I have been slowly chipping away at this edition of the newsletter for a good six weeks now, I felt encouraged to finish and send it out at the news that the KMGH Denver7 building at Speer and Lincoln was up for demolition — or possible historic designation. Reporter Corey Hutchins excellently details the short but time-sensitive saga in his latest newsletter, ‘Could a battle over brutalism determine the ‘landmark’ fate of a Denver journalism building?’ “

Could be? Could not? The clock is ticking, but that’s what happens when you care about buildings.

Below are links to the BusinessDen story, the Tiny Letter blog, the story by Corey Hutchins, and links from the Denver Landmark Preservation Commission staff submitted by the applicant and the staff report that could save it. Uh, research helps.