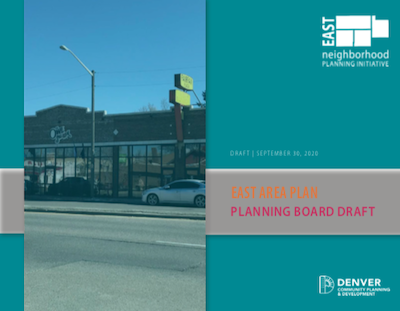 The East Area Plan sailed through on Monday night at the Denver City Council meeting. There was a one-hour public hearing. And a need to address an amendment that the Denver Planning Board had removed one sentence from the plan and it went back in. And there was time to ask questionsand comments about the plan.

The discussion was quite lengthy, but there was a lot to learn, including a vote to return the sentence in the plan that dealt with allowing single family units to be included with other housing types in the area plan. (Though putting it back in was a squeaker, since only one yes vote carried the amendment.)

(As a resident of the East Central Area Plan that was approved by the city council last month, I understand this. We had six neighborhoods to figure out how things would work because there are some real differences, like between Capitol Hill and Cheesman Park.)

Two things stood out for me during the council meeting. When City Council Representative Kevin Flynn, from District 2, mentioned this: “gentle density, which I call displacing you with a smile.” And, District 9 Council Representative Candi CdeBaca noted: “Density does not equal affordability without mandating protective measures.”

But as she continued, she was quoted in Denverite:

“ ‘We teeter back and forth on whether or not to allow them their up-zonings that always are justified by a plan like the one we’re contemplating tonight, and then we complain that we have to approve their up-zonings if plans exist to justify it,’ CdeBaca said.”

(If you ever tune in to watch a Land Use, Transportation and Infrastructure committee meeting, you can wallow in all sorts of up-zonings OK’d for developers.)

The other concern was the situation involving the East Colfax Neighborhood Association, which had problems getting involved in being participants for various reasons.

The following three paragraphs are from a story on CBS 4:

“ ‘This plan was 99% created pre-Covid. It’s not in any way an emergency relief package. But as soon as Covid hit, it started to get spun that way,’ said Tim Roberts, President of the East Colfax Neighborhood Association. ‘There is a very high rate of poverty in the neighborhood. There was a serious lack of representation of the East Colfax neighborhood on the committee and in the plan itself. There’s this disconnect between the city’s stated mission of helping people and making it so people are essential to the plan.’

“The city says it sought community input long before the vote was made, and had more before the pandemic hit. Roberts argued the latest drafts came during a time when it was unsafe for neighbors to have meetings and bring a timely, opposing argument before the city.

“ ‘Our ability to meet in-person was completely shut down and organization in the neighborhood was hobbled. However, the machinery of city planning did not miss a beat going forward,’ said Roberts. ‘We voted, as a neighborhood, for anti-displacement to be the #1 priority in our plan. There’s no agreement or communication around how that’s going to work.’ ”

As we say, they were relentless.

In a story yesterday in Colorado Politics, Roberts said that at a meeting last night with members of the East Colfax Neighborhood Association, he was going to “ritually” burn a copy of the East Area Plan. Totally understandable.

There are many links below in terms of the East Area Plan approved by the Denver City Council:

First if anyone wants to view this portion of Monday night’s Denver City Council meeting, go to 1:39, https://denver.granicus.com/player/clip/13909?view_id=21&redirect=true