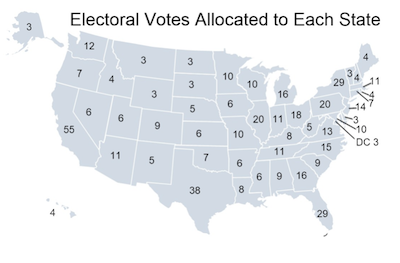 Right now, there are two big numbers that are showing on stories online: 279 for President-elect Joe Biden, and 217 for President Donald Trump. But there are many, many more numbers – like you and me — who voted. Even in a civics class years ago, this seemed as if sort of treating us as if we did not know anything. And until 1913, we could not vote directly for our senators; instead, the senators were chosen by the legislatures.

But the Founding Fathers, who were trying to figure out how to have a president, the meeting apparently took forever. They did not want a king – which made sense, because they had just fought to get rid of one – but the delegates to the 1787 Constitutional Convention were tussling about it for months.

But then, how do they figure out which states will have electors?  From History, again: “The result was the controversial ‘three-fifths compromise,’ which enslaved Black people would be counted as three-fifths of a person for the purpose of allocating representatives and electors and calculating federal taxes. The compromise ensured that Southern states would ratify the Constitution and gave Virginia, home to more than 200,000 slaves, a quarter (12) of the total electoral votes required to win the presidency (46).”

What a terrible thing to even type. Of course, women were nowhere to be seen. And even when the electors were to pledge to the person who won, things have often gone off the rails. These are faithless electors, and Colorado’s attorney general testified before the Supreme Court, and the state won.

From The Colorado Sun, reporting this past July: “In a unanimous decision, the justices sided with Colorado Attorney General Phil Weiser’s argument that if the state doesn’t have the ability to remove presidential electors bribery and political chaos could ensue.”

Fortunately, there is a movement to ask voters to be part of a national compact for the popular vote. Many Coloradans voted yes, but there are still many states to go for people to vote directly. I hope that other states sign up, too. Our vote is our voice, and it needs to happen.

Links below lead to http://www.History.com, a piece posted on the House of Representatives, a link to a piece about the fact that the Electoral College almost was ditched by the Senate in 1970 (but it didn’t happen), The Colorado Sun, and more.