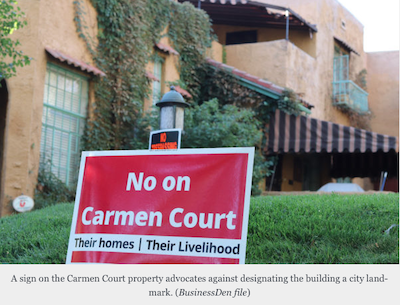 The David-and-Goliath drama focused on Carmen Court that began in April, and now it is October.

In one corner: David is the trio that submitted an application to save Carmen Court, when it was posted about the eligibility for demolition. The Denver Landmark Preservation Commission noted that that complex had value.

In a different corner: The Goliath is the mega-developer Hines wanted to scrape the complex – which is quite charming and historic – and build a luxury senior facility. The owners of the six condos were working with Hines.

After viewing way too many meetings of the Denver Landmark Preservation Commission and the Denver City Council’s Land Use, Transportation and Infrastructure Committee, we are now seeing that this issue will soon be played out. And to be honest, my brain cells were shaken after reading the “evaluation” of Carmen Court commissioned by Hines.

From a letter I wrote to the commission on August 1, in which I supported designating Carmen Court, there is this paragraph: “The report from the Heritage Consulting Group certainly dived in. It was commissioned by Hines and owners, and it is like reading a trial transcript that points out flaws in almost all sections of the application (and, in turn, the landmark staff brief).”

In short, the evaluation drips with vitriol, and a lot of misinformation – including making a comment that was incorrect in terms of a guidebook I had worked on. Jeez, I guess it helps to read the book before making a comment.

As of yesterday, the committee has moved the bill to the full city council, and the most important paragraph is from today’s Denverite:

“Landmark applicants, the people who want to preserve the buildings, have until Oct. 22 to withdraw the application and avoid the full city council process. Right now, (Principal City Planner Kara) Hahn said the landmark application would have its first reading during City Council’s meeting on Oct. 26. and a second reading on Nov. 2.”

And in today’s Denver Business Journal, there are quotes from Steve Charbonneau, who has been the mediator dealing with the applicants and the owners/developer. Here are the four  paragraphs that gives us a clue of where things stand:

“The two sides have indeed spent the intervening month and a half attempting to do just that, according to a report from Steve Charbonneau, a third-party mediator brought on to facilitate the discussions.

“Historic Denver — a nonprofit preservation organization that is not a party in the Carmen Court case, but has helped other groups find win-win solutions in similar situations, such as in the Tom’s Diner Case — contacted 20 local and national development companies whom they believed ‘would have legitimate interest and the ability to take on a project of this nature,’ according to Charbonneau.

“Six expressed enough interest to discuss price and other information under a non-disclosure agreement, but the groups were unable to secure a sale, Charbonneau said in his report.

” ‘I believe we have exhausted all ideas and options, given the unique layout, and the Applicants and Hines’ very different vision and goals for the property,’ ” Charbonneau writes. ” ‘I also believe that all parties acted in good faith and did their best to reach a resolution, given their differences and the challenges.’ “

While we worry about health in our city, state and country, and we react to the turmoil of the current election cycle, and the confirmation hearings about a potential new Supreme Court justice: All of this is is making me very afraid. So, perhaps the push to save a condo complex that has historic and architectural importance, may seem a small thing, but it is not.

This is from me, but not new: “… should be one of those meetings that will be similar in terms of what happened a year ago with a tug of war involving Tom’s Diner. It’s not pretty, but it’s worth the energy to remind those of us who live in Denver, change is not always what we want. When Denver is no longer Denver, there will be very little history left. And when every neighborhood looks like every other neighborhood, it will be unconscionable.”

Below are links to Denverite, BusinessDen, and the Denver Business Journal, and a link to yesterday’s council committee: