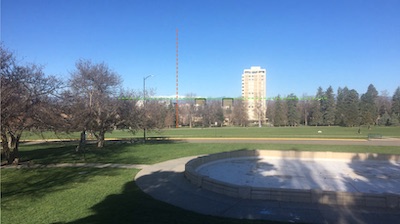 The concept of a view plane was codified about 70 years ago in an ordinance by the City and County of Denver, preserving the views of the mountains to the west. They serve as a backdrop for beauty, and for residents and visitors who love those views. Driving into Denver from the east to move here, it was like that purple majesty of the mountains stuff, which sounds corny, but it was true.

For years, view planes were discussed, but now, for many people they seem quaint. After all, planners and developers in Denver now have decided that density is the way to proceed to continue to build Denver. Perhaps a decade ago or so, there were discussions on view planes; now, not so much. Rezonings of many parts of the city have made changes so that buildings can keep climbing.

But there is still an organization that is watching out for view planes. It’s called the Neighbors for Greater Capitol Hill, a Registered Neighborhood Organization, or RNO. The issue lies in a plan being discussed in the Golden Triangle.

You say, what does Capitol Hill care about the Golden Triangle? That’s because the Cheesman Park / Botanic Gardens view plane is trained right into the Golden Triangle, where there has been talk about allowing “point towers” that can stand 300 feet tall. The Golden Triangle now is zoned to top out at 20 stories, usually about 200 feet tall; that still allows people to see the mountains. And there are like a half a dozen tall buildings either under construction or coming down the pipeline in that neighborhood.

About a month ago, I posted a piece on the discussions about the Golden Triangle Zoning and Design Plan, which is being discussed and commented on by an advisory committee; many members work or live in that neighborhood. The plan went before the city’s Planning Board for a discussion on April 15, but it was not for a decision, but a discussion — which was really quite interesting. After all, the plan is still in flux.  According to the city’s website, the next meeting will be on May 21.

What was even more interesting was that the RNO asked to have a meeting with the city planning staff and members of the advisory committee, and it happened. As they noted, “Based upon this new modeling, board members of NGCH requested a video meeting with CPD staff and a few members of the Golden Triangle Advisory Board.” That meeting occurred this past Tuesday with 9 people on-line.  “It provided a forum for an open and frank discussion of the perceived need for 300-foot point towers in the Golden Triangle, and the possible risk those towers would present to the mountain view from Cheesman Park – especially the risk from any towers at the southern end of the Golden Triangle.”

There were no decisions reached during that meeting, but the members of the RNO hope to continue to talk about this, with planning staff and committee members.

Below are links, starting with a link to the website of Neighbors for Greater Capitol Hill, but followed by links to earlier stories — including a column from 2007 in The Denver Post. It was a verbal slugfest between two City Council members. I highly recommend it, because it all came back to me. (At the top of the column, it just says The Denver Post, but go to the bottom of the Post column: It was written by Diane Carman, who is contributing opinion columns to The Colorado Sun.) Who could forget those City Council meetings?