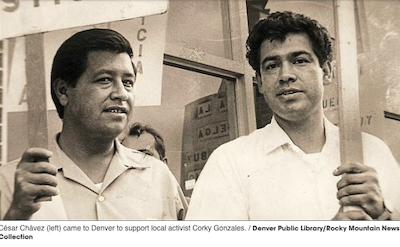 Tomorrow people mark César Chávez’s birthday, but today the City and County of Denver is honoring this; Colorado’s state workers will mark that day tomorrow. But, we all should be celebrating him. His fight for dignity, fair wages, and better working conditions all seem so basic, but farm workers had been treated like invisible men and  women (or worse).

Denver’s government workers have today off, which was made an official holiday in 2001. State workers may take a day off tomorrow by swapping this “commemorative” holiday for an official holiday. As for federal workers? In 2014, President Barack Obama proclaimed César Chávez Day on March 31; again, this is another commemorative holiday.

For those of us who have been active in a union, the whole concept was to make things better for workers and, really, for everyone. Now, as membership has dropped across the country, we have a different economy that stretches across the globe. Gig workers, independent contractors, adjunct instructors, and more people who do not have much, if any, protection in their work. When a pandemic runs across the world, this becomes even more disheartening as more people are losing their jobs.  Unions in this country began forming in the 1700s, though the post-World War II era was the golden time for union workers.

When Chávez founded the National Farm Workers Association in 1962 — which later became the United Farm Workers — Dolores Huerta joined in the movement, and they began organizing in the western states, especially California. They wanted protections from the government. They used non-violent tactics, demanding for better conditions and better wages.

Eventually, the nation finally woke up and noticed where their lettuce and grapes and tomatoes actually came from. Produce was not flying out of the earth to get in a truck for delivery all over the country. Someone spent hours stooping over to harvest them for marginal money. Adding a few pennies to a pound of grapes annoyed some consumers, but reality finally set in.

Chávez spent time in Colorado working with activists such as Denver’s Corky Gonzales, seeking respect and equality — which is what all people need and want.  Chávez often went on a hunger or no-water fast, with support from many other people, from politicians to celebrities.

The City and County of Denver replaced Columbus Day with César Chávez Day in 2001. If you lived here in the early aughts, there were still privately organized but problematic Columbus Day parades, whether protests by Native Americans or demonstrations from right-wing activists that pretty much started a riot.

The City and County of Denver replaced Columbus Day with César Chávez Day in 2001. If you lived here in the early aughts, there were privately organized but problematic Columbus Day parades, whether protests by Native Americans or demonstrations from right-wing activists that pretty much started a riot.

The links below lead to a history of the United Farm Workers; a story in today’s Westword in which César Chávez Day is an element about the change the state has swapped Columbus Day with a day to honor Mother Frances Xavier Cabrini; a piece in The Denver Post about closures, and a piece from a few years ago in Denverite about César Chávez Day and his work with activists in the state’s Chicano movement.

Chávez and the Chicano movement made a real difference in our communities. It’s called opportunity, freedom and cultural expression.

The Story of Cesar Chavez