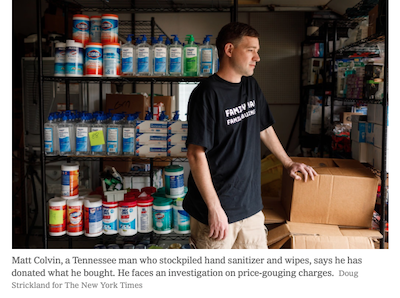 This past Saturday, The New York Times posted a story about two brothers (and others) who were stockpiling hand sanitizers and other important items needed during the virus spreading around the world.

Why the people in this story actually talked about this is beyond me, but, well…  Now Matt Colvin (so talkative!) has donated thousands of the 17,700 bottles of hand sanitizer to a church for distribution. The rest have been taken by the state of Kentucky, who will distribute these items, too.  The Colvins were bumped off Amazon, for jacking up prices.

The state of Tennessee is taking a look at this whole situation.

“A Tennessee man who became a subject of national scorn after stockpiling 17,700 bottles of hand sanitizer donated all of the supplies on Sunday just as the Tennessee attorney general’s office began investigating him for price gouging.

“On Sunday morning, Matt Colvin, an Amazon seller outside Chattanooga, Tenn., helped volunteers from a local church load two-thirds of his stockpile of hand sanitizer and antibacterial wipes into a box truck for the church to distribute to people in need across Tennessee.

“Officials from the Tennessee attorney general’s office on Sunday took the other third, which they plan to give to their counterparts in Kentucky for distribution. (Mr. Colvin and his brother Noah bought some of the supplies in Kentucky this month.)”

As you can imagine, Matt Colvin cried while talking about what he did.

Below are links to the donation to those who need help, and the original story, which racked up a lot of comments. Imagine that.