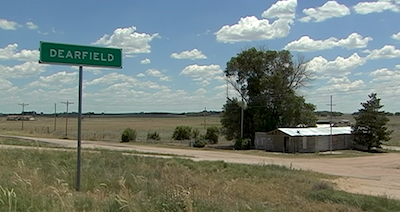 When most people zip along U.S. 34 about 25 miles east of Greeley, the little Dearfield sign is a mere green blip, the three grayed wooden structures mere ruins, the scrub land mere dirt that could not possibly support life.
In 1910, O.T. Jackson and others decided to follow a national trend and begin a black colony: Dearfield. Jackson’s claim on 320 acres sealed the deal and launched the town, one of about 15 black settlements in Colorado and among dozens across the United States where the currency was counted out in wishes.

“The new settlers at Dearfield were as poor as people could be when they took up their homesteads,” Jackson told a writer in 1915 for the publication Western Farm Life.

“Some who filed on their claims did not have money enough to ship their household goods or pay their railroad fare. Some of them paid their fare as far as they could and then walked the balance of the way to Dearfield.”

They ate potatoes one early winter, slept in caves dug into the hills; but even with dry-land farming, they began producing bountiful crops.

It was a time of change for the country’s black citizens, battered by the end of Reconstruction and the diminution of rights in the South.

Booker T. Washington was urging people to return to the land. W.E.B. DuBois was telling them to get an education. Some people, Larson notes, did both. The settlers of  Dearfield heard Washington’s call, and named the town’s main street after him.

Now, Dearfield is approaching 100, and though long empty – the nail basically closed the coffin when O.T. Jackson died in 1948 – the town has friends who want to help preserve the buildings and turn this windswept place into an interpretive center.

The words above were written 12 years ago.

It is the beginning of a story I wrote in 2008, about the efforts to save the few remaining wooden buildings in Dearfield, which is in Weld County and not far from Greeley.  The committee of historians, government supporters, and the input from the Black American West Museum are still meeting to find ways to help Dearfield survive into the future.  It’s not easy, since some of the plots in Dearfield are still held in other hands, though the Black American West Museum owns many of them.  (One of the few African-American settlements in place is Nicodemus, Kansas, which attracted settlers in the late 1870s; it is now a National Historic Site.)

The upshot: There’s a new film on Dearfield titled “Remnants of a Dream: The Story of Dearfield, Colorado” produced, written and directed by Charles Nuckolls. (This is the second film on this aspirational settlement; in 2009, “Dearfield: The Road Less Traveled” was created by donnie l. betts, with Reynelda Muse.)

The 2019 film was shown on PBS earlier this month. There are links below that lead to a story on CPR, to the film itself, and to a story in The New Yorker on the work being done by the African American Cultural Heritage Action Fund, at the National Trust for Historic Preservation.

Last summer, there was a spate of stories about a home builder in Weld County getting ready to erect affordable housing on part of Dearfield land; there’s a link below to one of those pieces in Colorado Politics.

The good news here is that the home builder – Clayton Homes – has come to an agreement to give lands to the museum, and more.

In an email to Brad Mueller, AICP, the Director of Greeley’s Community Department, I asked him where things stood. He replied: “Plans are underway for a land swap with Clayton Homes, which would result in a consolidation of the most historically valuable lands, plus some funding for the (Black American West) Museum.  The parcels that the museum would swap/sell are in more remote locations.  All in all, a win-win situation.”

2 Replies to “They had a dream. And they still do. And there’s another film on Dearfield.”