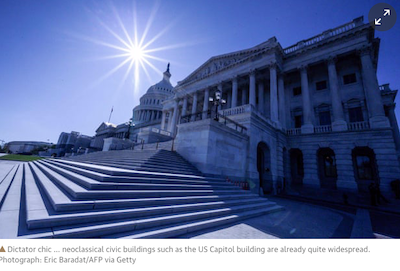 For the first time in my life, I feel like I’m part of the 1 percent.

For architects, for those who appreciate good architecture, and for design gurus everywhere, this new draft order from the White House is not just ridiculous, it is downright frightening.

As for this 1 percent situation, a comment from Marion Smith (below), who is the chairman of the National Civic Art Society. This is the organization that “spearheaded” this new order as it stands at this point, and one might assume that the current president would be all for this, with the draft rules focusing on new classical buildings constructed with federal funds. After all, the current president has shown through his own projects and his own home in Trump Tower that he favors furbelows, flourishes and glitz, with enough gilded furniture to rival Fort Knox.

An eye-opening quote from a story in The New York Times offers this: “For too long architectural elites and bureaucrats have derided the idea of beauty, blatantly ignored public opinions on style, and have quietly spent taxpayer money constructing ugly, expensive, and inefficient buildings,” Marion Smith, the group’s chairman, wrote in a text message. “This executive order gives voice to the 99 percent — the ordinary American people who do not like what our government has been building.”

The 99 percent, no matter what Smith may opine, may not really agree with the concept of Make America Neoclassical Again.

This new order also notes that “contemporary architecture has ‘created a built environment that is degrading and dehumanizing.’ “

Wouldn’t that really be a more applicable description of keeping children in cages at our country’s southern border?

And more: “If a style other than classical is proposed for a project, the order establishes a high bar for getting approval: it would establish a presidential ‘re-beautification’ committee to review designs and would still give the White House final say.”

Even reading this has a chilling effect.

(And recall: In December, the White House selected an engineer to be the Architect of the Capitol. Engineers play a crucial role in construction and deserve our respect, since we want our buildings to stand up and we don’t want our bridges to fall down. But architects bring knowledge and design sense and understanding to projects of all types.)

In the various stories on this proposal, the phrase “dictator chic” has popped up. And for good reason, as recounted in The Guardian by writer Steve Rose (the photo above was included in that story). The headline: Will Trump make architecture great again? The dark history of discolor chic (this piece was posted on Architectural Record.)

“For a property tycoon whose own architectural tastes lean towards International Style skyscrapers with lots of shiny trimmings, Trump could be seen as throwing stones from a mirror-glassed house here, but his penchant for neoclassicism also brings to mind more retrograde, even sinister associations.

“In the 18th and 19th centuries, Europe’s classical revival sought to reconnect to an idealised past, alluding to values of order, rationality and morality. These proved to be illusory, given the bloody warfare that was to come. Hitler’s chief architect, Albert Speer , also appropriated the tradition and grandeur of neoclassicism to serve the Nazi project, just as Benito Mussolini’s fascist Italy used it to recall the might of imperial Rome.”

Yes, that is “dictator chic,” and it appears to be knocking on our own country’s door. As The Guardian notes, the “The draft order, dispiritingly titled Making Federal Buildings Beautiful Again, argues that neoclassicism symbolises the founding fathers’ ‘self-governing ideals’, whereas contemporary styles such as brutalism and deconstructivism are incapable of embodying America’s ‘national values’. “

National values? I guess we still have some of those.

Time marches on, and this type of collection of fine buildings teaches us how design changes in terms of architectural styles. But an administration that wants to live in the 1850s is knocking on the wrong door. And we know what that really means.

Below are numerous stories and columns in The New York Times, Architectural Record, The Guardian, and ENR.