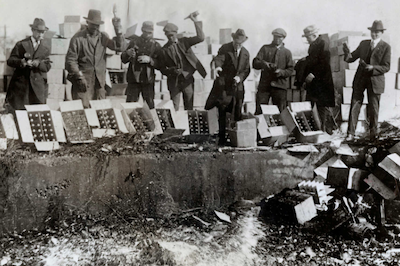 While scrolling through today’s online New York Times, there was a story about the upcoming centennial of the Volstead Act, when Prohibition swept through the United States on Jan. 17, 1920.

But just as you would think, since Colorado is always in the forefront of just about everything, the Centennial State began Prohibition in 1916.

Just looking at the photographs in The New York Times and a blog called Erstwhile, it could make a strong man (or woman) want to weep.  (The photo above carries this caption:  Nearly 750 cases of beer being destroyed by federal officials in Washington, D.C., after the passage of the Volstead Act, November 1923. / The New York Times.) Sam Bock, the writer of the Erstwhile blog item, developed the exhibition “Beer Here! Brewing the New West.” It is interesting reading. (“Beer Here!” continues into this August.)

Of course, there was still liquor, whether imported over a border, stashed away, or made in stills that churned out poison and upheaval and crime. And there was heimgemacht, or home brew, or making wine in the basement. And why not?