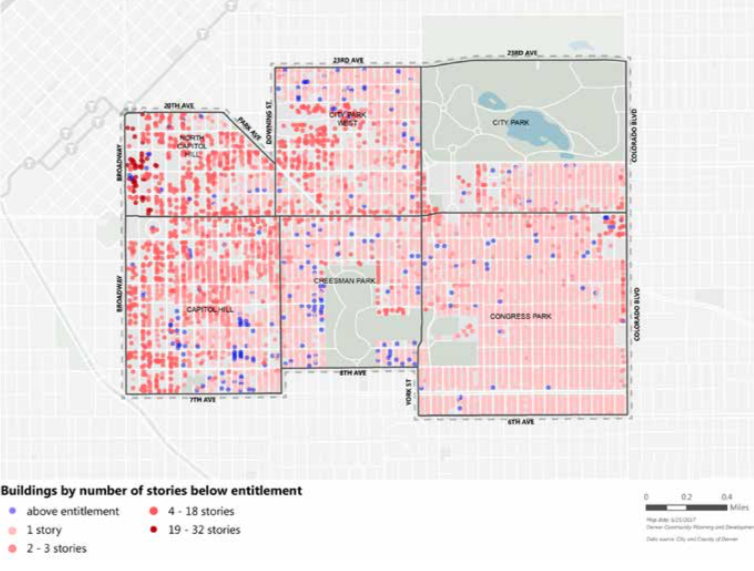 Back in 2016, the Denver planning department began working on new area plans for the city’s neighborhoods. Some of the earlier plans were really antique; for instance, the Uptown and City Park West plan was adopted in 1986.

And although that plan seems quaint – very simple, and looked like it was written on a typewriter – it described the Uptown area as almost a few steps away from a holler in Appalachia. (The “Uptown” label was created by real estate gurus in the neighborhood decades ago to create an aura, though the nickname still hangs around.)

But that was before the city adopted a new zoning code.

So the problem with both the East Central Area Plan and the East Area Plan – the  farther-east sister plan – is that both documents make it clear that these neighborhoods basically are crying out for more….. something?

Like taller buildings? Newer buildings? Demolish a single-family home in order to build two residences or a duplex? Maybe some affordable housing, which actually makes sense, if it is actually affordable?  With the new zoning allowances, it’s not exactly the sky’s the limit, but these homes certainly can be much taller. One of the headings in the East Area Plan says: “Building Height/Zoning Mismatch.”

(I don’t think anyone would be surprised if the city decided to ban any more single-family housing, which has become a “thing” since Minneapolis and other cities have made that decision.)

In both the East Central Area and East Area plans, this sentence certainly will catch the eye: “In general, the larger the gap between existing heights and the maximum allowed by zoning, the greater the development potential.”

Dang! Those dark red dots “indicate buildings that are 2 or more stories below the maximum the zoning allows.” Well, let’s just invite developers to a table set with a feast. And just forget the perils of gentrification, which many areas of Denver have already  experienced. Most neighborhoods in Denver have wonderful areas, but maybe a few places that could use some love, not a lobotomy.

These plans have become incredibly important because of the way the city wants to reshape neighborhoods — because it can.

The links below lead to the most recent East Central Area Plan and the East Area Plan, the Denverite story, a Denver Post story in August about urban renewal plans for East Colfax, the beginning of the area plans in 2016, and the old-style 1986 plan for the Uptown neighborhood.