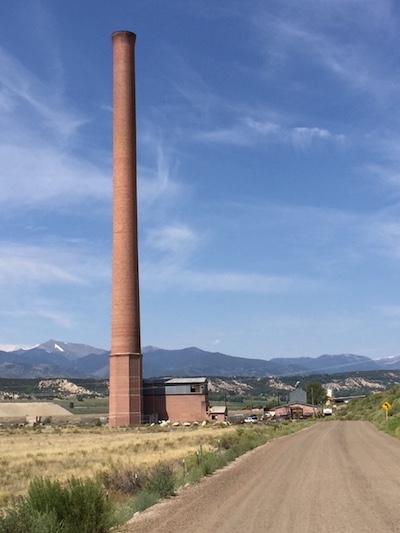 Driving back to Denver from Salida – a town I really like – I encountered a lengthy detour to avoid roadwork on Highway 285. Boring. Tedious. But it gave me a lot of time to think about the final moments of my stay in Salida.

My final stop was at a giant smokestack over 360 feet tall that was part of a smelting operation just north of town. I had never noticed it before, until I saw a map that mentioned Smeltertown. The very tall smokestack was built so much higher than the previous stack for an unfortunate, if practical, reason: The earlier, shorter smokestack belched out chemicals that had a terrible impact on humans, animals and plants.  The same junk came out of the new stack – just farther away from the ground.

I learned this from three signs posted to explain why the stack is still there. There had been talk of ripping it down, and there had been Superfund activity on the site cleaned up years ago. But those with an interest in history – for bad and for good – wanted to have it stay.

To wipe it away, would wipe away the work of the people who made the bricks, built the stack, worked the smelter, and on and on. Is it correct to wipe away the history of the back-breaking and dangerous work? It’s called taking a realistic approach to history – and to remember to never do that again.

Acknowledging terrible things that have happened in Colorado, in the United States, and in just about every country that has ever existed has perpetrated horrible things on its citizens and its enemies.

So when I got home, and got caught up on the news, I saw that the people of Stapleton have voted concerning changing the name of that development. I do not live there.

And I understand why there is a push to change the name: Benjamin Stapleton, a long-time mayor of Denver, was a member of the Ku Klux Klan. Many people in the administration during that period (all over the state, and the nation) were Klan members. The white Protestant hegemony wanted to keep it that way.

When I moved to Denver 30-plus years ago, I quickly learned about Klan activity in the city and the state. I think I was sort of shocked: After a decade of living in the south, where the presence of the Klan had been so well known, so corrupt, and so vicious, I was taken aback.  But hate and prejudice, violence, and downright stupidity know no boundaries. We know that certainly is still true today.  Hoods are out, but nativism is still in.

The Stapleton voting closed yesterday, and the results are to be announced on August 21.

Still…. What to do about history? Do we wipe it off the map because we hate the situation, or do we use the terrible situation to teach why we don’t want this to take hold again? This is up to those who own property in Stapleton. A school in Stapleton has already changed its name to Montview.

That’s what happens when you are stuck on a detour. But there have been many more of these kill it or keep it situations.  The Stapleton situation is not alone. More on those in another post.

Below are links to information on the Salida smokestack and to coverage of the step taken by owners in Stapleton to change the development’s name, in Denverite, The Denver Post, to the website asking for a name change, and a story on Denver 7 The Denver Channel about opinions on this issue. (Comments by historian Stephen Leonard are quite pertinent.)

Voting to rename Stapleton ends today, but results won’t be available for weeks