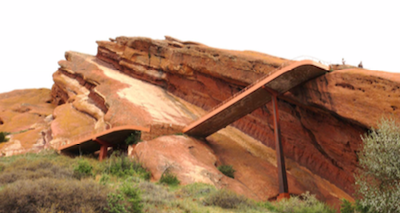 Almost two months ago, the city proposed demolishing the South Ramp at Red Rocks, with concerns for its structural integrity, among other concerns. Also on that agenda before the Denver Landmark Preservation Commission, the staff and commissioners also presented a new concept for a stage cover.

The proposal for a new stage cover got a lot of discussion, but there will be more to learn about this in the future when it comes back with a refined design.

What really got people engaged was the South Ramp, like where’s the replacement plan, and the historic importance to the entire Red Rocks experience. As I wrote here in May, there was more to learn about this ramp:

“In the case of the ramp, the applicant is Jacobs Engineering Group, Inc., and a city agency called Arts & Venues. The commission usually (but not always) first seeks a way toward rehabilitation – not jump in first for demolition. It was noted during the presentation that the rehabilitation would add another 30 years of life. There is a concern, though, about the way the ramp is constructed (an I-beam encased in concrete, and a steel sheet on the bottom). As well, the ramp does not meet ADA standards.“

“Commission members wanted more information on this proposal, such as a condition report, a structural analysis, and a replacement plan. At Tuesday’s meeting, the commission decided to revisit the proposal on July 9.”

Then, at the July 9 meeting, there was more information in a lengthy report by Jacobs Engineering Group, Inc. There are also were comments within the report by an engineer with credible experience on historic bridges, but who had issues with some conclusions in the report. (Note: He had worked for Jacobs at some point.)

The landmark commission members spent quite a long time drilling down on what was troubling them about this whole situation. Like, why is there not a replacement plan on the table, when demolition was supposed to be the solution.  Another concern was that the transit bridges discussed in the report by the outside consultant were not pedestrian bridges.

Denver’s Red Rocks’ designation as a landmark was limited in scope; it was completed in the 1970s. On the other hand, the relatively recent National Historic Landmark designation for the full sweep of Red Rocks tagged the ramp as a contributing structure and of historical importance.

It became clear that even though the city A.) at times seemed hesitant to hold a public hearing on this, and B.) the National Historic Landmark information differed from the city’s earlier quite narrow work, commission members decided on the side of preservation.

The upshot: First, there will be a public hearing at some point on the demolition, once there is a replacement plan in place. (Please note: In ordinance-speak, 40% and more of demolition means demolition.) Then, it became apparent, that the National Historic Landmark information in a way trumped everything, prompting a move to designate the ramp as a contributing structure. They are related in terms of architecture, intent, and period of significance.

Talk about a stunned audience, but there were speakers there, and other people had sent in persuasive comments about the path forward. Those speakers and writers included two members of the board of Friends of Red Rocks, a founder of Friends of Red Rocks, representatives of Colorado Preservation, Inc., and a landscape architect who co-authored the Historic American Landscapes Survey – Red Rocks Park.

And there was one recovering journalist, who has never before spoken to a commission to plead a case. In terms of the written comment, here’s part of it:

“The commission and landmark staff again face a decision involving a key aspect of Red Rocks. Over the decades, there have been good changes: replacing weathered and warped seating (full of splinters), adding a visitors’ center but sinking it so it did not conflict with the amphitheatre, replacing and expanding restrooms, and stabilizing the soil under seating. On the other hand, there were necessary challenges to stop the concept of beaming logos on the rocks, turning planter boxes into corporate box seats, and the idea of adding railings and changes in the planter boxes.

“Now it is this commission’s turn to champion the aesthetics and design of the South Ramp, a major component of the Red Rocks experience and history. It is time to request a public hearing. Much of the material submitted on this issue is complicated and specific in terms of engineering. But it is not a foreign language. The commission has the floor; the community needs a platform to speak out.” (That was in writing; I do not really remember anything I said.)

Below is a link to the staff report and the application that were discussed at length. Also, in other Red Rocks news, City Auditor Timothy O’Brien chided two city agencies – Denver Parks and Recreation, and Denver Arts and Venues in “a pair of follow-up audits that found the agreed-upon changes were not being carried out.” The links below are from 2019 and 2018 about these audits, as reported in Colorado Politics.

2 Replies to “Late, but: What happened when smart discussion got amped up about a ramp”