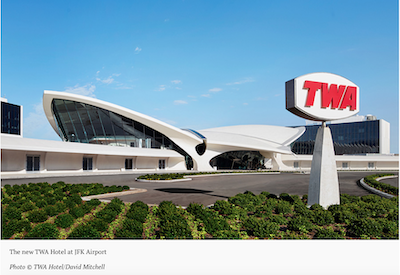 My personal Modernism Week began with the sad recounting of what happened to I.M. Pei’s projects because the City and County of Denver has treated his work in a despicable  manner.  That undoubtedly will continue into the future; the 16thStreet Mall is being considered for an update, but who knows how well that will go?

Other influential architects have also been snubbed (or worse). Denver didn’t support the work of Santiago Calatrava when he designed a lyrical hotel for the airport, a building that would have worked with – and showcased – the much-loved peaks on DIA’s terminal roof. Instead, Calatrava left the project, knowing there would not be funding or support, and he took the color for the hotel – white — with him, which would have complemented the roof of the terminal. Instead, we have a hotel that is green, spreading its wings as if it wants to grab the terminal and whisk it away.

There are other examples that show Denver as its most foolish, but why belabor that: Slot homes could run amok, but proposed critically acclaimed civic projects were not honored.

This comes to mind because most airport hotels are ciphers. They are there as a service for travelers.  But the completion of a complementary, even subdued, hotel behind the newly restored former TWA Flight Center at John F. Kennedy Airport is something to think about.

The Flight Center, designed by Eero Saarinen, was completed in 1962, but was abandoned in 2001. Landmarking the structure in the mid-1990s saved the voluptuously curvy Flight Center, protecting it from demolition. It still looks ready to take off in flight. Now, with a lot of support and a savvy (and gutsy) developer and numerous architectural firms and much less money than I would have expected, the newly opened and restored Flight Center serves as a public space and a lobby for the new TWA Hotel.

Below are links to several stories about the Flight Center’s resurrection, especially a sensitive piece in Architectural Record. I have included a link to a story in CityLab because of its recounting of the Flight Center’s history and JFK (formerly Idlewild), as well as links to other pieces on the Flight Center. The photos are wonderful (please note the photo credit on the image above.) . After that, there are links to Westword columns by critic Michael Paglia on the coming – and going – of Santiago Calatrava. And finally, there is a story from earlier this year in The Denver Post about the Westin Hotel (a brand of Marriott International) on its resistance to provide information to Denver’s auditor.