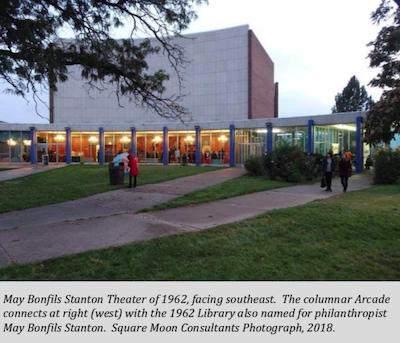 This is my personal Modernism Week: Day Two.

For many, the Loretto Heights campus stands out for its historic Richardsonian Romanesque sandstone structures, such as the administration building and the chapel. They are beautiful.

But there are also really fine Modern buildings on that campus, especially the May Bonfils Stanton Performing Arts Center, which is linked to the May Bonfils Stanton Library next door. The buildings were designed by the firm Musick and Musick, and constructed from 1961-1963. The walkway between the two buildings was enclosed by glass in the 1970s, and it became a gallery. (An inventory and survey report of all campus buildings was conducted by Square Moon Consultants, LLC, earlier this year; the photo above is included in that inventory)

The administration of Loretto Heights over the years chose well-respected architects for their buildings, going back to the 1890s. The elevated site that hosted the campus offers stunning views, but now neighbors and preservationists wonder what will become of the campus.

The campus was purchased last year by Westside Investment Partners for about $16 million. So far, Westside has included a preservation covenant in the deed addressing the Administration Building and the Our Lady of Loretto Chapel. Another building, Pancratia Hall, will be converted into housing, including affordable housing, according to the new owner.

Last night, the May Bonfils Stanton Theater Arts Community Stakeholder Workshop met in the library, to learn about the status of a feasibility study for the theater. The presentation was conducted by Alex Keen of Keen Independent Research, LLC, and Teresa Koberstein, of Victor Gotesman, a firm that specializes in performing arts facilities planning. Mark Witkiewicz, a principal of Westside, has attended other meetings about the campus, but was not there; instead consultant Marcus Pachner was keeping in touch with him during the workshop.

The short version of the key information is that getting the theater up to speed would require about $22 million, addressing the asbestos in the theater, adhering to ADA requirements, replacing the HVAC systems, and updating restrooms. Oh, and beyond that dollar amount, the theater needs a new roof. The feasibility study was funded by the Bonfils Stanton Foundation, Westside Investment Partners, Denver Council District 2, and Denver Arts and Venues.

The final report will wrap up on June 30, and will be distributed to the funders.

Ten days before that workshop, the city showed plans to offer more information to those who attended. The city is working on an area plan to offer possibilities s to the developer that could re-make the campus. Like, what to build? Heights? Streets? Mobility? Architectural styles? Amenities? So far, there have been two community meetings to gather information on what people in that part of the city want to see happen to the campus. At the June 1 meeting, the city showed plans that would address this, including one that listed areas for 2.5-story, 3-story, 5-story and 8-story buildings including  residential. It makes my head hurt, but remember: Oh, those views.

There is interest in the theater, which apparently is the largest performance venue in southwest Denver. And if you know the arts community, there are never enough spaces for performances and for rehearsals. Denver Councilman Kevin Flynn, of District 2, strongly supports keeping that theater and making it a working theater again.  And when Mayor Michael Hancock showed up at the June 1 meeting (pre-runoff vote), he also supported keeping the theater.

At the end of the day, city planning and forums and workshops are all well and good.  But it comes down to what Westside wants to do with the area plan and what the developers see for the future, in terms of residential construction and retail opportunities.

The links below lead to the current status of an area plan for Loretto Heights and information from the community meeting on June 1. Other links lead to a Loretto Heights Steering Committee held on May 28, coverage of the June 1 meeting, and links to the two firms that have been working on the feasibility study for the theater. 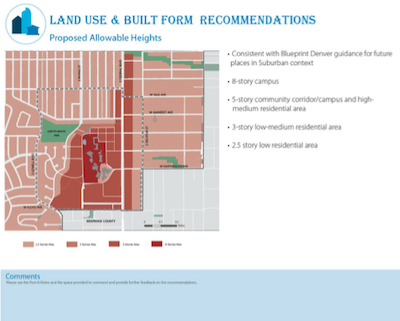