For everyone, loss continues, whether it is the death of a loved one, or an event so horrible it cannot be wiped away.

We have it this week, leading up to this Saturday, April 20. The 20thanniversary of the mass shooting at Columbine High School is something that just about every area publication and television station will take note of this week, as will out-of-town news outlets.

Toward the end of the month of the past 19 Aprils, I have noticed a sick feeling in my stomach. This year is no different: There is a litany of numerous mass school shootings in the United States (and other mass shootings in many countries), but for Colorado, it’s the build-up to the mass shooting at Columbine. (As I am writing this, an alert from The New York Times reports the Pulitzer Prize for public service went to The South Florida Sun Sentinel for its coverage of the Parkland school shooting.)

In 1999, it seemed as if every reporter at every metro Denver outlet was involved in the Columbine coverage. Aside from helping where possible, the only assignment I received was one that was painful, but that cast a wider net, in a way: interviewing an art history professor at the University of Colorado, who was working on a book on public and spontaneous memorials.

Professor Erika Doss is now a professor of American studies at the University of Notre Dame, and in 2010, she published a book called Memorial Mania: Public Feeling in America. I knew her through her writings on public art and popular culture in the 1990s, and during that period, she was gracious to give an interview on memorials.

I cannot include a link here to that column, but the text is below (search words remain in yellow in the Rocky Mountain News’ archive stored in the Genealogy, African American, and Western History search area in the Denver Public Library). Sorry this post is so long, but when I read the column last week, it took me back almost two decades).

Below are several links, from an extremely sensitive story in Westword  and a complete issue of 5280 devoted to several aspects related to Columbine, to one of several stories in The Denver Post published this week.

It is the perfect suburban shrine, sprawling, growing without boundaries and taking on a life of its own.

The Columbine High School memorial is piled under tents and draped along fences. It crawls up and over hills in Clement Park, interrupted by parking lots filled with news media trucks, satellite dishes and the other trappings of the communications machine.

After days of rain, the mud is trying to win, though straw and bark chips have been spread on the ground.

The memorial has become a place where there is little sense of place. It is a color-drenched sea of teddy bears, flowers, butterfly balloons, poetry and paper chains in a neighborhood of gray and beige houses.

From a distance, the memorial looks like a fair.

People wander around the site, some with video cameras recording every bit of the experience, others handing out flowers to those who visit empty-handed. You can hear the tears. One woman seemed to recoil when approached to take a bouquet. The young woman toting an armload of wrapped blossoms reassured her: “No, it’s free.”

That sense of material culture and its effect on attitudes toward the mystery of death are part of what emerges from the experience of the shrine. So does the tension on the hill where 15 crosses have been hoisted, a provocative act in all definitions of the word.

“Sleep baby sleep” was one of the first phrases scrawled on 13 of those crosses, but “hate breeds hate” was the message on the two erected for the young men who died at their own hand. “How can anyone forgive you?” someone has written on those two crosses. “I forgive you,” is below, over and over. On the cross carrying Dylan Klebold’s picture: “No one is to blame”; on the side of the cross carrying Eric Harris’ picture: “You died over a year ago . . . and no one noticed.”

On student Steven Curnow’s cross, someone has scrawled, “Although I never met you, when you died, I died.” At the foot of Rachel Scott’s cross is a book about the Holocaust, The Rescuers.

Other mementos are spontaneous and heartbreaking; after all, each new loss brings back the memory of each past loss. The note attached to a fuzzy stuffed bunny, with pink bows around its ears, says: “My daughter died on Aug. 10, 1987. Her name was Heather and she was 19 years old. Her animals have been a great source of comfort to me and I hope that they will comfort you also. Be at peace.”

John Tomlin’s brown truck has become a parking lot shrine – Colorado tag 93922RS. There is a letter jacket with the notation: “To all the people of CHS. You are all creations of God. You are beautiful people.”

Growing daily, flowers crushed and decaying, the memorial at Columbine is a signal of a shifting cultural approach to death and how people participate in their society, says an American studies professor immersed in researching shrines, memorials and grieving.

“Spontaneous eruption” is how Erika Doss describes the wave of memorials springing up across America, from the gifts left at the Vietnam Veterans Memorial in Washington, D.C., to the fence at the site of the Oklahoma City bombing.

The site in Union, S.C., where disturbed mother Susan Smith sent her sons slipping into a lake to drown also has attracted such offerings, including the proposal to build a sculpture with an angel beacon where “families can spend more time together,” Doss said.

Doss wants to learn “why we historicize what we do. Why Oklahoma City and not Wounded Knee?”

That people feel compelled to bring objects to such a site as Clement Park and the fringes of a high school reflects on the culture.

“The leaving of things at these instant memorials shows that for a lot of people, that is how we mourn.”

Doss, who teaches at the University of Colorado, has written widely on the role of popular culture and public art in American life; Elvis Culture recently was published.

A few months ago she began research for a book on “the visual and material culture of grief, mourning and death,” and plans to travel through Europe this summer, following tourists making the pilgrimage to sites set up as shrines to Princess Diana. That includes the tunnel in Paris where she died and Harrod’s department store in London, as well as the country home where she is buried.

The speed with which the Columbine shrine has grown and the items people leave also are telling.

“A lot of it has to do with the notion of gifts and offering. We live in an overwhelmingly material society. Such an exchange is considered an act of charity,” she said. “People want to give.”

Yet the act of giving – placing the flower, leaving the teddy bear, penning a poem – also can seem a shallow act. “When people give something, they expect something in return. It says something about the giver.”

It also is “an easy out” – a quick act that can preclude facing “difficult issues, like gun control. Is giving a teddy bear going to assuage our guilt about our behavior in society?” Doss asked.

This immediate, massive and international show of feeling brings up other issues, among them the growing realization that people want to reclaim death, she said.

“Over the past century, it has been manipulated and controlled by doctors and hospitals,” she said. Death tucked away, in an institution, makes it not real, she said.

“This is the reclamation of death in a public sphere. Americans desperately want to reclaim what is real, what is a significant part of life. They refuse to deny death.”

But they want something to remember it by.

What will become of the memorial? Officials of the Colorado Historical Society and Foothills Park and Recreation District have said they want to preserve items from the memorial.

20 years after Columbine shooting, little has been accomplished on gun control

The photograph below, taken on April 30, 1999, is stored in the News’ archives in the Denver Public Library, and carries this credit: DENVER ROCKY MOUNTAIN NEWS PHOTO BY George Kochaniec. 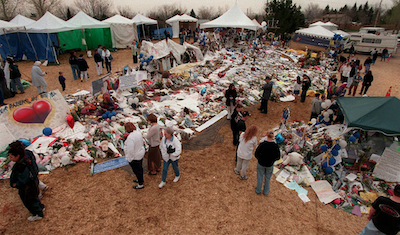