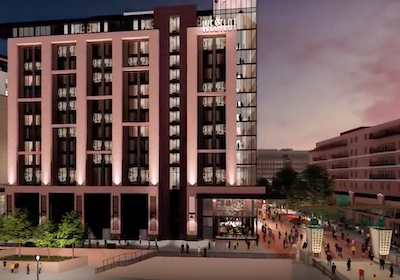 Last July, noted artist Lonnie Hanzon learned that his popular public art piece – The Evolution of the Ball – was headed for storage as the Colorado Rockies began the process of turning the West Lot into a giant complex, including residential units, a hotel, and a plaza with retail and restaurants.

In response, Hanzon created a Facebook page called Save the Evolution of the Ball, garnering support from fans who thought the art installation should remain as it is: an arched entryway leading to Coors Field. Hanzon’s work consists of 108 highly glazed three-dimensional tiles that depict balls of every type, with three large balls sited elsewhere on the arch made of the same green steel that marks Coors Field.

The fear, of course, was that Evolution would never be seen again, instead sitting in boxes in the back of a storage unit. (The photo below is from that Facebook page.)

Digging into my old clips from the Rocky Mountain News, I found this from August 20, 1995:

“Lonnie Hanzon’s Evolution of the Ball, a tilted gateway … has proved a natural magnet to the ballpark … .  The arch, a $115,000 commission that Hanzon says started as a lark, is topped by balls in glass mosaic, sort of glorified disco ornaments.

“Hanzon says he haunted bookstores researching sports dictionaries, but what comes through in this sculpture is less scholarly pursuit than whimsy and a down-to-earth attitude toward an event – major league baseball finding a home in Denver – that has changed life here in subtle ways.

“Evolution makes viewers look and laugh, point and pick favorites, yet gives some staying power to what could have been a one-joke routine.”

In short, Evolution was a grand slam out of the park.

But now, after months of discussions among all parties, the most recent renderings by the architecture/engineering firm Stantec include Evolution located on what is called Wynkoop Walkway. The complex is now named McGregor Square, honoring a long-time president of the Rockies who died suddenly several years ago. (The photo at the top of this post is a detail from the new renderings from Stantec.)

The announcement of the name last week also included a fly-through video that gives a sense of the elements that will be part of the project – including Evolution. Some modifications will be needed to fit Evolution on a new site, though still on Wynkoop Street.

Fans of this piece of public art (and baseball) undoubtedly will be keeping an eye on all of this. Completion of McGregor Square is expected by early 2021 – and Evolution needs to be there, too.

The first two links below lead to recent stories in The Denver Post and Westword; the  latter includes a link to view the fly-through, complete with urgent music. (The photo below shows the rendering of the entire complex, from Stantec, Courtesy of the Colorado Rockies). The third link goes to a page on Stantec’s website with the new renderings. And the fourth link leads to a Westword column about the possible loss move of Evolution.