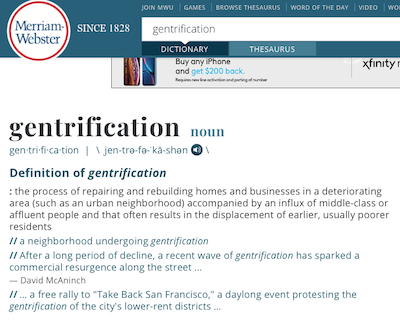 This isn’t news, but gentrification has become a hot topic in Denver — actually, in many areas across the country.

There are differing definitions of the word, but the Merriam-Webster version seems about right to me. Apparently, the word was first used in 1962, says that source, and it has become a more and more difficult concept to deal with in terms of how economic forces have displaced people from their long-time community.

Yesterday, I posted a link to a story in The Colorado Sun on challenges facing the Westwood neighborhood, in terms of housing, affordability, and changing demographics.

Actually, the Sun has been running a series this week about gentrification and change. Today’s piece looks at displacement issues in cities elsewhere in the state; yesterday, there was a story on Sun Valley, which is watching long-standing affordable housing facing changes that will include market rate housing. There also is the big cat in the neighborhood: The highly awaited construction of Denver’s Meow Wolf, which many people are excited about, but it is changing the playing field for some of the residents. Other developments are being added to the mix, too.

Below, I have included links to these stories, including sidebars that explore issues related to the topic. For the series, the Sun worked with the University of Colorado’s News Corps, spotlighting the work of student journalists who tackled important and difficult topics.