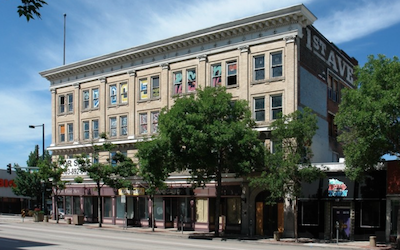 Many years ago, I was eating lunch in The Hornet, and staring at the boarded up 1st Avenue Hotel across Broadway. What a shame, I thought. Such an elegant building, and so prominent in the Baker neighborhood.

The hotel was built in 1905 to a design by architect William Quayle. The hotel was convenient for guests who had business with the automobile outlets on Broadway, the nearby downtown, and with state agencies.

Then a solution seemed to be at hand: Restaurant owner Jesse Morreale bought the building, and owned it from 2008 to 2015. He offered to give me a tour of the building. It had been an SRO for years, but he said the upper floors would become offices. I have no idea if that ever happened. Then, with a thriving restaurant and wine bar in the building, the city shut things down over claims that the building had structural issues. The hotel again was boarded up, but it now has a new owner, Zocalo Community Development.

In today’s BusinessDen, there is a finely detailed story that outlines a lively lawsuit involving the building, the owner, and the previous owner. Here is the first paragraph; the link to the story is below.

“The former owner of a four-story building along South Broadway in Denver says the current owner acquired it through a series of misrepresentations and spread false rumors that the seller was a heroin addict.”

I’ve been following the 1st Avenue Hotel project as it wends through the Denver Landmark Preservation Commission, since the building is a designated landmark. The current owner wants to rework the interior to create 106 micro-apartments. The owner also has sought tax increment financing from the Denver Urban Renewal Authority and an affordable housing loan from the city.

The building again has become an item for the landmark commission because the developer wanted to knock down the addition west of the building, to be replaced by a five-story structure. The demolition was approved last year. At the November 20, 2018, commission meeting, there was a quick comment that the alley between two zone lots would remain, with two lots remaining as opposed to one.

There is a long list of stories when you search out “1st Avenue Hotel.” I’ve included a few links below, as this sad tale moves through the city – and now the courts.