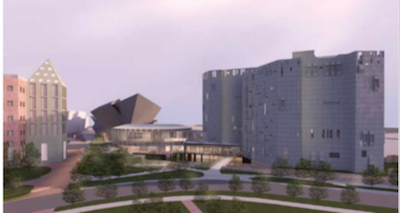 In the spirit of bolstering my mood, let’s turn today to why preservation of key buildings in Denver (and everywhere) is so important to our lives. Beauty, history, legacy…and more.

In case Number One, Denver’s Landmark Preservation Commission today addressed the Comprehensive Sign Plan that the Denver Art Museum has proposed for the massive project underway on its north campus. (The Hamilton Building south of West 14th Avenue has its own signage plan for the museum’s south campus.)

The project to the north involves an extensive rehabilitation of the Ponti Building, with changes to make room for a new welcome center, adjustments to the grounds – and a new system of signage on the streets around the building and around its home in the Civic Center Historic District.

The Ponti Building, designed by Gio Ponti and James Sudler, is now named for philanthropist and DAM board chairman J. Landis “Lanny” Martin and his wife Sharon. The building is to re-open in 2021, to mark its 50th anniversary. The Martins pledged $25 million to the museum, which will get major updates and additions to the tune of some $150 million. The Ponti – the Martin – closed almost a year ago. Yes: new elevators!

The Commission approved the DAM’s mega-project in 2017 since it is located in Civic Center. But now, the Commission has addressed the quantity – and quality – of the signage that will help visitors navigate what is in some ways will be a whole new part of Civic Center. ArtHouse is the designer on the signage plan, including wayfinding signs that will help guide visitors. The concern of the Commission was the number of signs, and the look of illuminated signs and touch screen signs. As well, two tenants will be housed in the lower level of the new welcome center, and the signage for the two businesses needed to be OK’d.

I’m sure there will be further discussions on this, since the Commission gave the plan a conditional approval. The code was going to limit only three signs, but the area around the Ponti Building is large and will be new to us all.

Here are links that lead to the DAM and the graphic designers’ application document, and to the report from the Commission staff.

And then there is Number Two: The Denver City Council Monday night approved a landmark designation for the 1908 Essex Apartments in North Capitol Hill. For years, the building at 630 E. 16th Ave. was the Denver International Hostel. But a couple of years ago, the place closed because of concerns about the building. (The photograph above ran in Denverite.)

I waited for a chain link fence to be erected around it, but I was so wrong. That’s because the place is being rehabilitated, in terms of new windows, new doors, interior work, and a stack of front porches that has been built back on facing East 16th Avenue. The owner, Wamserville West, LLC, intends to make the Essex half apartments and half “a boutique hospitality concept.”

I was curious to see how Denver City Council approached this, so this morning, I watched via video the section of last night’s council meeting during the public hearing at the end of the proceedings.

It was quite interesting. There were six speakers: Two were positive (including an owner of Wamserville West and a representative from Historic Denver), one speaker was interested in learning stories about the place, and three speakers were concerned that this was undoubtedly going to offer high-end rentals and not any affordable housing. The designation sailed through, but it is as clear as a new window that affordable housing is a topic that will haunt the city until something moves on this situation.

Below are two links. One is to a story from Denverite last month, with a really interesting history about the building and how it came to be, and a link to Denver’s city council meetings. The video at the top is from last night’s meeting. Open that video, and then move the video’s time bar to about 1 hour and 6 minutes into the meeting. The public hearing also addressed the building’s history.