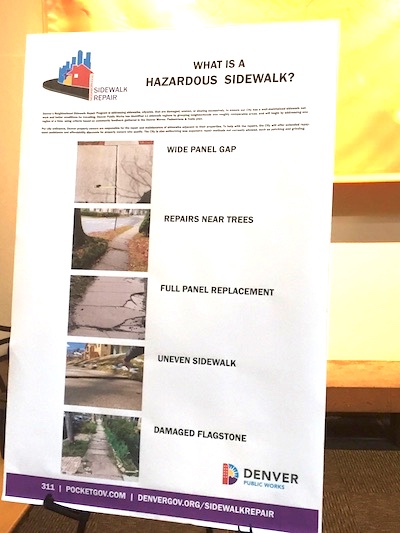 With a blog, it’s a constant learning process. So when I updated a post on Monday concerning what was discussed at the Sidewalk Working Group of Denver’s City Council, I updated a previous post rather than starting a new one. So, here’s more information on what happened, as well as two new links for information.

UPDATE FROM MONDAY: Well: The Sidewalk Working Group of Denver’s City Council met today (Oct. 22) and the first part of the session was all about the sidewalk repair program that affects property owners in the city. Apparently the person I talked to with the city didn’t get the news.

Matt Bryner, with the Public Works Department’s Right of Way Service, outlines several changes that will have an impact on the program in terms of how it affects you and me. He said that inspections began on Aug. 15 in the Speer neighborhood, but they decided to pause the process for a bit to learn more about the flagstone information.

Turns out that: the thickness of flagstone replacement will be 2.5 inches,  not 4 inches; the city will allow mud-jacking (drilling holes in flagstone slabs to pump material under the stone to level it out, which is less expensive than re-leveling the slab); the city will extend the time allowed for completion from 45 days to 90 days, and the plan will exempt repairs from Dec. 15 through April 1 because the flagstone quarries are not in operation during the winter.

Bryner also told city council members in attendance that his department is keeping statistics on the work done so far, but the number of inspections is too low (about 80 properties have been entered in the department’s system), to present an accurate picture of the situation. He noted that colored concrete will be less expensive to owners who don’t want to incur the expense of mud-jacking and/or replacement of a slab.

As he put it, those involved in the program are continuing to learn and improve as this program fully rolls out.

As for the city sidewalk gap program, where sidewalks are missing or create a gap between where one stops and another starts, there are 355 miles of sidewalk gaps — including 45 miles of gap areas on city-owned properties. The priorities for the work will focus on city-owned properties, areas that access transit lines and schools, places with high-injury reports, and areas of the city that need a boost in health because of obesity. Funds are coming from various sources, including  from the capital improvement program aimed at city-owned properties ($2.5 million in 2019) and the 2017 Elevate Denver Bond, for a total of about $47.7 million.

New data on the sidewalk program is included on the first link below, with the presentation that was made on Monday. Also, here’s a link to a sidewalk meeting story that ran in the October 23 edition of Denverite.